Souylemane Samb sits under a crowded tent on a hot Senegalese day. He wears a canvas vest with Trees for the Future printed across the back. Despite his dark sunglasses, his expression is easy to read - the tall 43-year-old is smiling contentedly as he waves a flag that says “Kaffrine 2 Graduation Day.”

Souylemane is at a graduation for more than 200 farmers celebrating the completion of a four-year agroforestry program with Trees for the Future (TREES). Using what TREES calls the Forest Garden Approach for the last four years, the farmers have successfully planted themselves out of hunger and poverty. Souylemane is an Assistant Technician for TREES, his job is to work with farmers and help them become experts in agroforestry and regenerative agriculture. Ultimately helping them succeed as farmers in a region and climate where farmers don’t typically fare well.

As he presents diplomas to graduating farmers, Souylemane remembers being in their position. In 2018 Souylemane graduated from the TREES program himself, after joining the program in 2015. 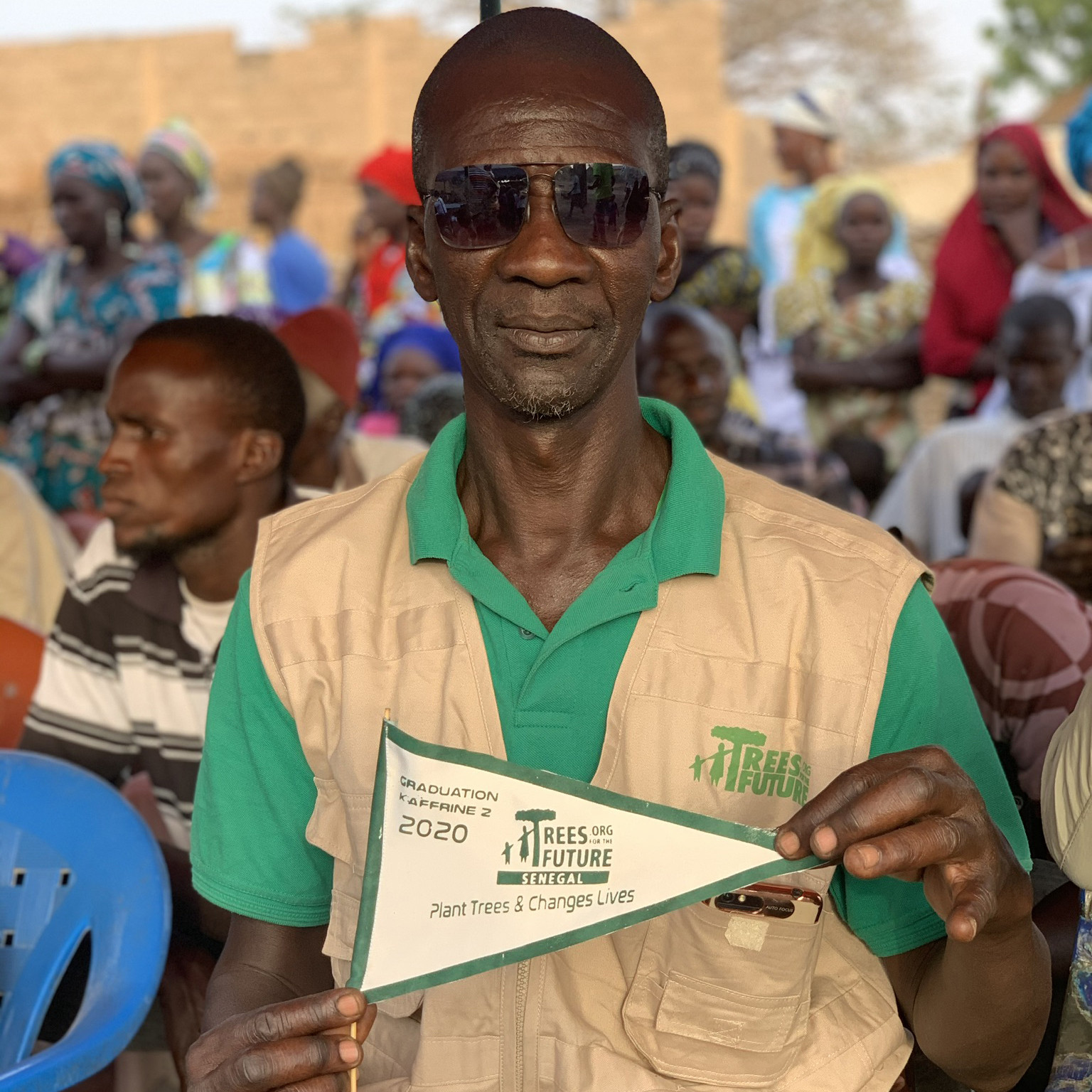 “Before joining TREES, my land was not well organized. I planted things randomly and with no real knowledge of how best to do it or what kinds of crops to pick,” he recalls. “My soil was also degraded from years of chemical use.”

A farmer all his life, Souylamene points out that farmers like him were never set up for success. Despite practicing agriculture for centuries, he says farming has never really evolved in a way that benefits both the land and the farmer.

“Farmers want to do the work but they don’t always know how to do the work, how long things take to grow, or seasonal and market planning.” 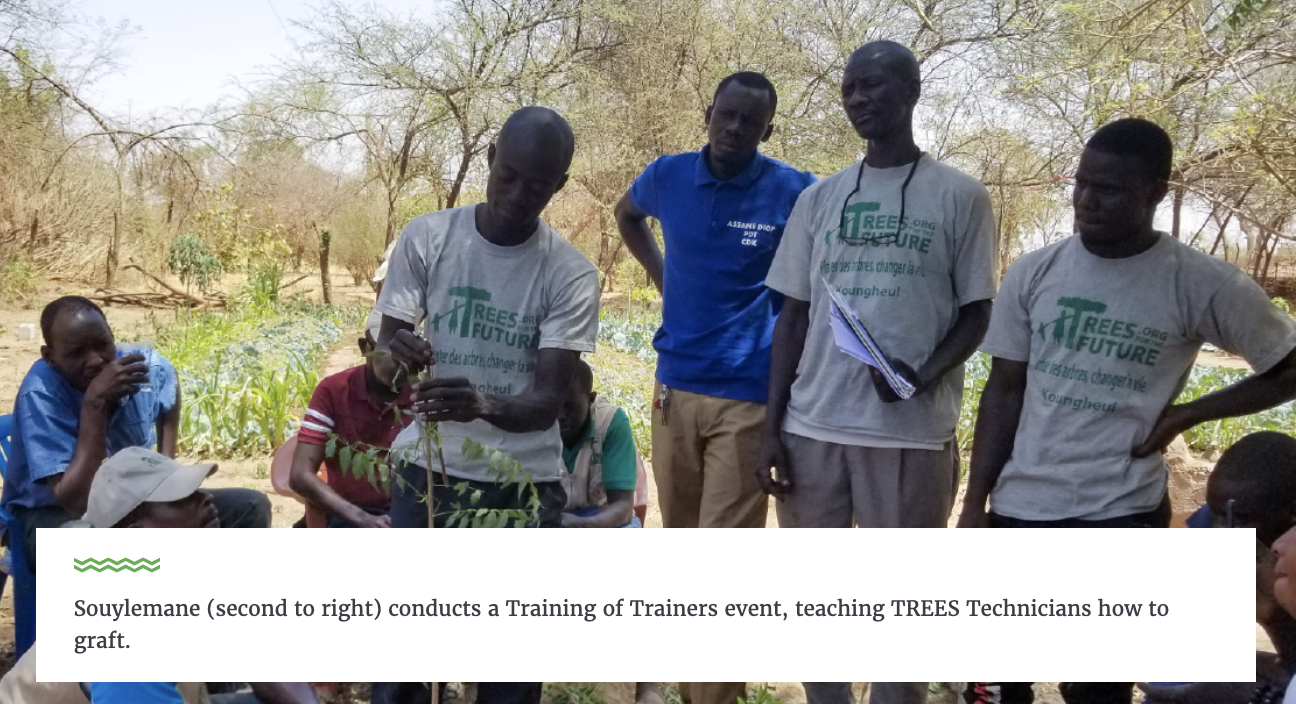 Recalling some of the biggest challenges he faced before implementing the Forest Garden Approach, Souylemane says deforestation is rampant in Senegal because farmers are forced to cut down what little tree cover they have to try to protect what little crop production they can achieve.

“Now live fencing saves money, so we have no more worries that animals will get in. The principal aspect and foundation of Forest Gardens is protection! It’s the number one most important thing! And now we feel our land can flourish, and all the life that comes with it can flourish, too.”

Seed supply was another major obstacle for him.

“There were many seasons that I unknowingly bought bad seeds from market. I spent 50,000 CFA (about $100 USD), that was a third of my entire earnings for the year back then. I spent all that money and nothing came up. Nothing came of it!”

In late 2014, he met a TREES technician while in town. Although he says he was weary of another international development organization in his community, he decided to attend an informational meeting to learn more about the program.

“We’ve had many interactions with organizations trying to help us, but none has spoken truth like Trees for the Future,” he says today. “Everyone in Kaffrine, all of the Forest Garden farmers, say they have never seen a project as successful as this.” 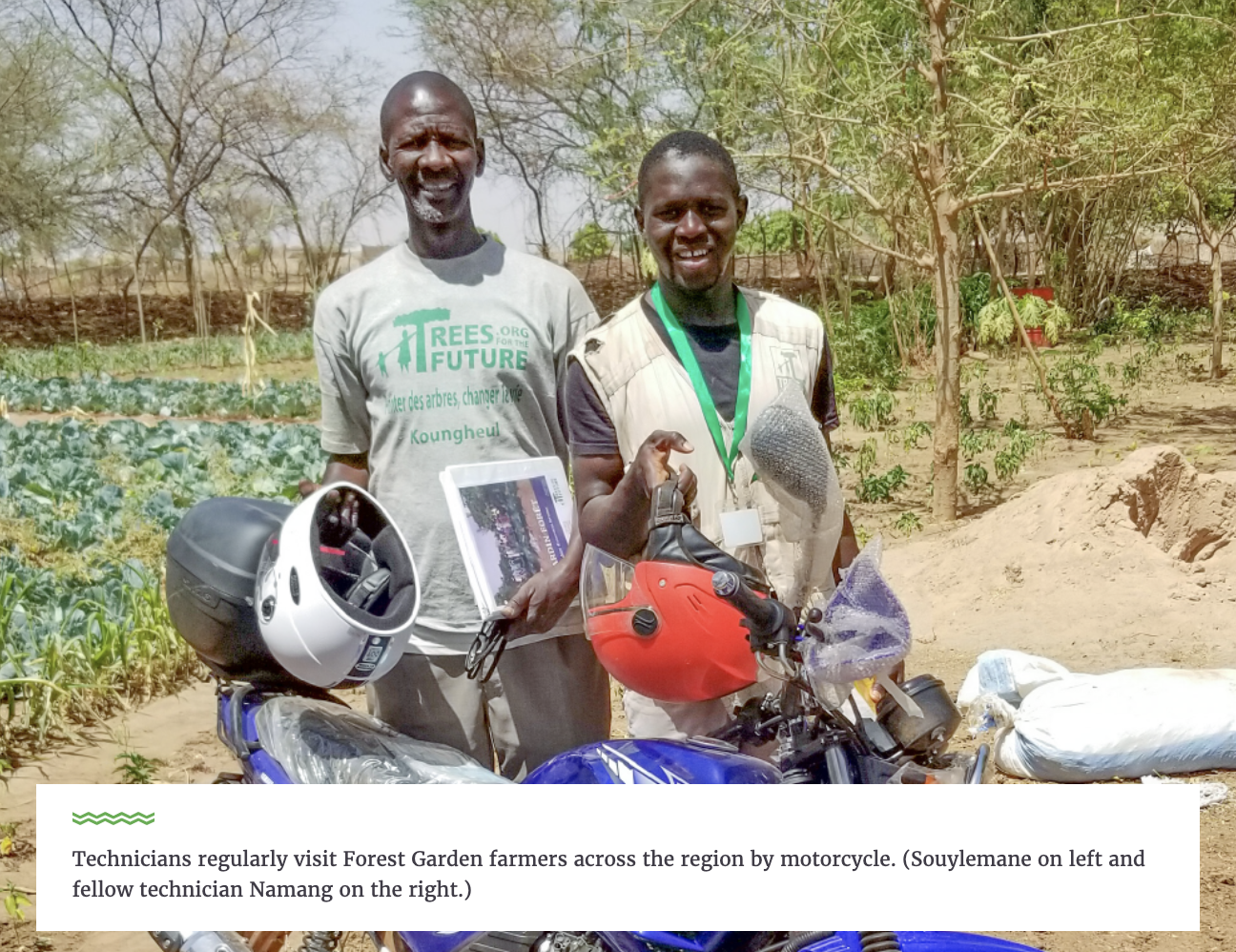 Souylemane joined the program at the beginning of 2015 and soon began learning everything about agroforestry from his Forest Garden Training manual and the TREES technicians.

“Training has brought me so much knowledge! I learned about agroforestry and its importance for making farms better, faster,” he says. “I learned how to graft, how to organize my field, tree pruning, nursery care, composting, how to save and select seeds.”

Souylemane also participated in TREES’ water initiative. In semi-arid Senegal, farmers like must have a reliable source of water, but with such little tree cover, wells can regularly dry up. To break this cycle of poor groundwater recharge and rapid evaporation, TREES launched its Loxo Loxo program in 2019, connecting farmers’ land to a central water source in town. Souylemane says the water initiative helped improve his land even more.

Finding Success in the Forest Garden

Where before, he was growing meager crops of chili peppers, lettuce, and okra, Souylamene now proudly describes a completely different world.

“When you open the door you see two piles of compost, tons of big trees that are pruned properly, crops growing in the alleys between trees. We have a water spigot now and so many varieties of vegetable crops. You can hear the sounds of birds, bees, wind that comes and passes over the garden… peace only.”

A lot of work that he says was most certainly worth it. Today, Souylemane, his wife, and their five kids are living healthier and more stable lives. With diverse foods in their garden he says their nutrition has improved greatly and they can now make a consistent living from their harvests.

“I have things to sell at the market now, before I did not. I would go and buy things but I rarely had anything I could sell there. Now I bring my vegetables and I make money.”

Often, Forest Garden farmers report using their newfound income to pay for their children’s school fees. With his Forest Garden income and his salary as a TREES technician, Souylamene can afford to send his younger children to school and his older daughters to university where they are studying business and law.

As a technician, Souylemane says he enjoys being able to help other farmers change their land and lives.

“I’ve never seen a program so successful that is reflective, well-conceived, that really takes farmers out of poverty. TREES accompanies them sustainably through all of these steps and then that’s it, they have the skills they need for the rest of their lives!” When he comes home from a day of traveling to other farmers’ Forest Gardens, he says his favorite thing to find in his own garden is tomatoes. “Tomatoes! Sometimes I will just eat them raw with a little salt. Or my wife will pick some lettuce fresh from the garden and we make a salad with dressing and dinner is ready.”

The Kaffrine 2 graduation marks five years since Souylemane joined Trees for the Future and became a Forest Garden farmer. He is one of 75,000 farmers to have joined the Forest Garden Training Program to date. 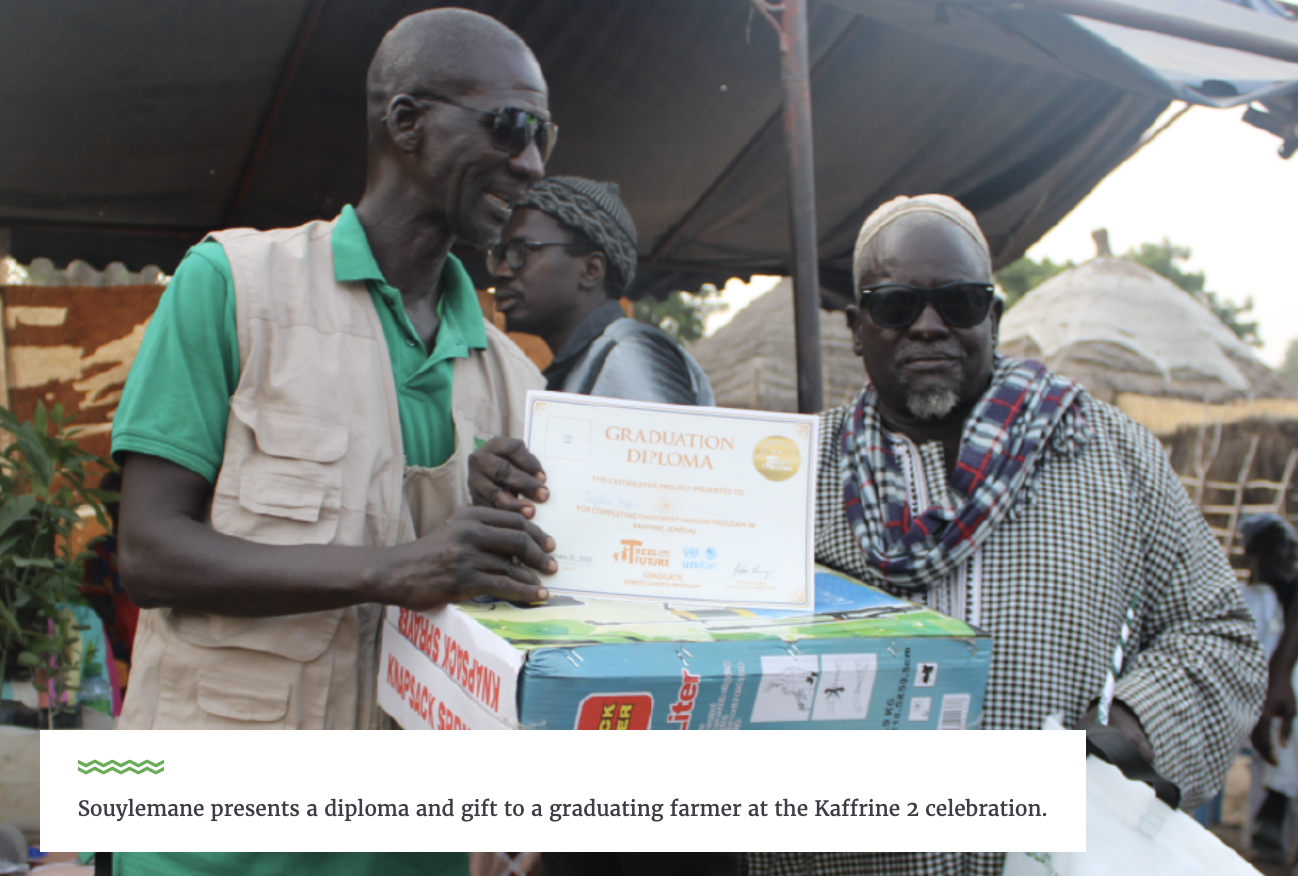